From the Ottawa Journal Archives

From the Ottawa Archives, I’ve recently found the following shot of W.J. Lintell and Sons food market, as seen in January 1954:

In 1936, they had opened their grocery store in the Glebe, as seen here in the Ottawa Journal:

And here’s the same location today…though 750 is technically now the building next door where the Bridgehead is located! 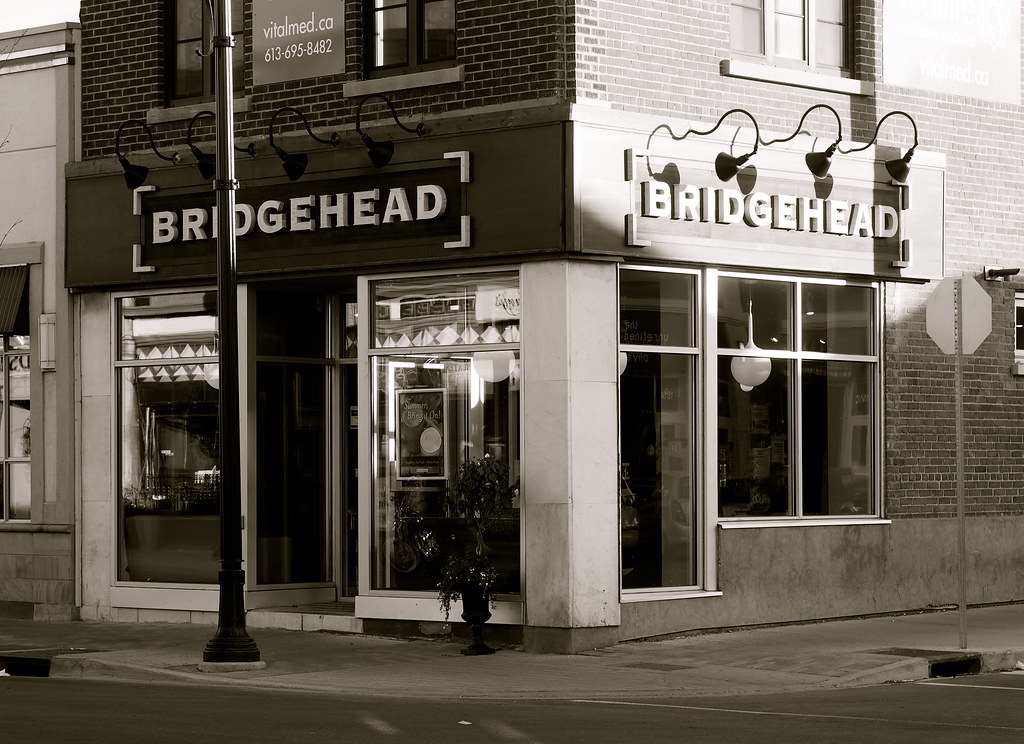 Here’s an interesting event that the Glebe Heritage Committee is promoting:

WHAT? A One-Day Heritage Plaque Event in the Glebe
WHY? To celebrate the wonderful architecture and social history of the Glebe.
WHEN? During the Great Glebe Garage Sale on Saturday May 23, 2015

WHO? The owners/residents of Glebe homes with support from the GCA Heritage Committee.
HOW? Prepare and install a simple temporary plaque/sign and attach it a stick or tree on your lawn near the sidewalk that identifies the history or your home and its architectural style. This could include details on the builder/architect and details on it’s historical occupants.

You can find a basic 1/2 page template and an example here: (MicroSoft Word Document) (or by e-mailing us at heritage@glebeca.ca), or feel free to design your own! Type it up, handwrite it, include photographs, whatever you like! We suggest you print it on a 1/2 page adhesive label than can be adhered to a foam board/cardboard and stapled to a long wood stake.

During last year’s Great Glebe Garage Sale, the GCA Heritage Committee and Heritage Ottawa partnered to conduct a trial of a one day plaque event of all the homes along Glebe Avenue East of Bank and Linden Terrace. The trial was a great success enjoyed by both the residents of the buildings as well as many hundreds of visitors who passed by and read the plaques. The Heritage Committee would like to make this an annual feature of the GGGS and in help increase awareness and appreciation among residents and visitors of the special and value heritage character of our Glebe neighbourhood.

For additional information on how to research the history of your home, check out the City of Ottawa Archives guide on Researching the History of your Home. For other assistance or questions, contact the Heritage Committee at heritage@glebeca.ca. The committee is happy to help identify the architectural style of your house or prepare your label for you with any information you might have.

I recently had an article published in Apt613 about the photographer Frank Tyrell, which you can read here.  Tyrell photographed Monkland Avenue in the 1930s for the Federal District Commission:

Worth mentioning is that Tyrell could be considered a defecto Glebite…well, he grew up in what is now known as the Glebe Annex, at 426 Cambridge Street.  The house is at the corner of Cambridge and Plymouth.  It once was a beautiful red brick home with some interesting features, such as a side and front verandah:

Here’s a close up of the detail of the front:

Notice the back of the house, which has an unusual addition, although in this google streetview the new addition can be seen.

Unfortunately, as the google street view images show us, a more recent addition with awful siding has completely obliterated much of the side verandah and the red brick walls and the trees:

Before this addition, the house might have had a good chance of being designated a heritage home…the addition, a cheap add-on not in keeping with the look of the rest of the place, completely destroys any chance of historic designation.  Ugh, Frank Tyrell would have said.

The WordPress.com stats helper monkeys prepared a 2014 annual report for this blog.

A New York City subway train holds 1,200 people. This blog was viewed about 7,100 times in 2014. If it were a NYC subway train, it would take about 6 trips to carry that many people.

note: This post was originally published in 2012 but has been updated with new information.

The top photo is 910 Bank Street, ca. 1870s, built for John Garland and later the home of Alexander Maclean and the later still Annesley College before demolition in 1949.

Here’s another view of the house, as seen in 1892 when it was the home of Mrs. Thomas McKay:

Currently occupied by a parking lot and the Beer Store.

Next door was the home of his business partner, John Mutchmor, now called Abbotsford House, and built in 1873 (and seen here in 1928):

John Mutchmor, businessman and land speculator, as seen here in the 1870s.

Here’s his partner John Garland in 1875:

And here’s another view of their store on Sparks Street:

Here is interior of the next store Garland an, on his own, as seen in 1892:

Here is the exterior of one the buildings he had constructed, known as the Garland Building, at Queen and O’Connor, as seen in 1898:

At bottom is Elm Bank House, built by another Ottawan, Thomas McKay, and located on the south side of the canal near where the Sunnyside public library is now. (Misidentified in the LAC catalogue as the John Garland House.)

This obviously did not happen and Clemora Realty was able to continue promoting the area as a prime place to move to and build a home, as is evident from the following advertisements in the local papers over the next few years:

The following is a particularly nice ad for a house located on Powell Avenue, from the Sept. 28 1912 Ottawa Journal:

This is 314 Clemow Avenue (hiding behind the trees), midway between Percy and Bronson on the south side.

It is a nicely styled but surprisingly modest looking house given the person who lived there.  From 1920 to 1961, this was the home of Tommy Gorman, owner, among other things, of the Ottawa Senators.

He went on to become Olympic gold medalist for the men’s lacrosse team in 1908:

Gorman was also co-founder of the NHL in 1917, and then from 1923 to 1925,co-owner of the Ottawa Auditorium on Catherine Street:

He then gave up hockey for a while, championship horse racer in the late 1920s and early 1930s.  This was followed by a second career in hockey, starting with the Chicago Blackhawks,as seen here with goalie Chuck Gardiner: 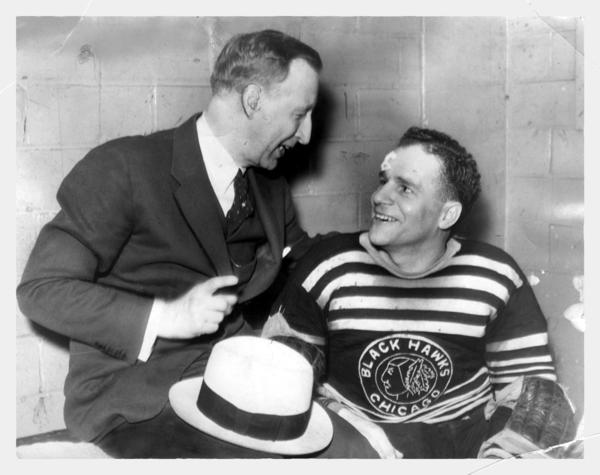 leading up to becoming general manager of the Montreal Canadiens, where he signed up the still unknown Maurice Richard in 1942, and this helped lead the Canadiens to two Stanley Cup victories at the end of the 1943-1944 and again at the end of 1945-1946.

In his later years, after retiring from the managership of the Montreal Canadiens, he was involved in various sporting enterprises in the Ottawa area, including management of the Connaught Park Racetrack.

Late in life, in May 1957, Gorman recollected some of his endeavours in the pages of the Ottawa Citizen:

Incidentally, uncle Jerry Gorman, was a stage actor of note in the late 19th century who also went on to race and train horses, owned a much nicer house designed by Francis Sullivan in 1913.  The house, located on Ardmore Avenue near where Cleary is on the Ottawa River, was demolished sometime in the early 1960s to make way for the Ottawa River Parkway:

Ambitious and energetic, enthusiastic and well-liked, Gorman seems to have done it all.  His widow lived on in the house on Clemow until her own death in 1970, and then  the house was sold  outside of the famiy.l

The house that was the home of many prominent Ottawa people, concluding the chairman of the NCC, Douglas Fullerton, who lived here with his wife from 1961-1996, and then his widow from 1996-2012, was demolished sometime during the week of July 15-20, 2014.  The Elm tree, one of the last remaining elms on the street, and which was saved through the effort of Fullerton, was damaged at the base during the demolition work.  This tree should be designated natural heritage under the Ontario Heritage Act.

John J. Allen, mayor of Ottawa from 1931-33, built this house in 1912-13. This historic place is designed in a distinctive Prairie architectural style, with key features being the boxy contours, deeply inset side veranda with classical revival pillars, symmetrical fenestration pattern, the l-shaped layout, and the the buff brick exterior.  Either Allan Keefer or Francis Conroy Sullivan or Walter Herbert George was the architect,  as all three were well-versed in this particular style, but there is no confirmation on who the architect was this yet.

Allen established Allen’s Drugstore in 1905 at the corner of Bank and Laurier, and ran the business until he sold it to the United Drug Company in 1918, which later changed its name to Rexall. Allen stayed with Rexall until 1925, first as a branch manager, then operating 2 stores, located at 20 and 48 Sparks Street. Before becoming mayor, Allen served as president of the Ottawa Welfare Bureau.

Allen died suddenly in 1935 while on a visit to Montreal.

His widow sold the house in 1936 to a John McRae, a consulting engineer for the city of Ottawa.  McRae lived here until 1939.  From this date until  1945 Lloyd Breadner, Air Vice Marshall RCAF Headquarters, called this place home. For more info, see http://breadner.hpedsb.on.ca/index.php/about-breadner/history and  http://www.findagrave.com/cgi-bin/fg.cgi?page=gr&GRid=20938476

From 1946 to Nov. 1950, C. Reid Hutchison, lived here with his wife.  Hutchison was assistant manager of Hugh CArson Co. Ltd, manufacturers of Harness, Trunks, and Bags, Head office and factory, 68-74 Albert Street (near the intersection with Elgin).

Prior to this home on Clemow, Hutchison lived at 124 Powell.  He was  very active as a curler, with membership in Glebe, Ottawa,and Rideau Curling Clubs, and was the son of a prominent dentist and curler O. Hutchison. He Died in a hunting accident in Nov. 1950 in Buckingham, Quebec.  From 1951-1959, widow Margaret Hutchison, lived here and worked as a real estate secretary at AH Fitzsimmons and Son.

This unusual house that has both prairie style and gothic revival architectural charactertistics is over a century old, and was built in 1913 for the politician Alexander Johnston (1867-1951).

Johnston began his career as a journalist but was first elected to the House of Commons as a Liberal in 1900, re-elected in 1904, and was defeated in 1908.

From 1910 to 1931 he was the Deputy Minister of Marine and Fisheries. responsible partly for the Dominion Fisheries Museum located near Queen and O’ Connor,

and he was also a representative at the International Radio Conference in Washington in 1927 and in London in 1929.  He is in this group somewhere from the 1927 conference.

When he retired there was this story from the Montreal Gazette.

Preserving our neighbourhood, one street at a time.

Join me as we wind back the time in Ottawa.

A Blog about Peterborough, Ontario

GlebeSite is a chronicle of observations on the Glebe's architecture, urban design and history.

News & views on what's happening on the West Side of downtown Ottawa.

GlebeSite is a chronicle of observations on the Glebe's architecture, urban design and history.